Circulating levels of insulin are very important to your hormonal balance.

Insulin is a hormone made in your pancreas, and is secreted into the blood stream in bursts when you eat.

Insulin’s primary purpose is to tell your cells to absorb sugar (glucose) from your blood into your various cells – to store as glycogen or make it into readily usable energy. Think of insulin as a “key” that lets sugar into your cells, so it can be used in the cycle that sustains your body.

Insulin promotes growth and protein synthesis, and its receptors are found in most cells of your body.

Your body’s systems tend to operate via feedback loops. Insulin rises when your blood sugar is high due to eating or one of the other causes listed above (in order to make your cells absorb the blood sugar), and it drops back down once much of the sugar is absorbed.

Insulin resistance is a common problem that occurs when the sugar in your blood can’t penetrate your cells, because it means your cells can only access a small amount of the energy they need.

Symptoms and Complications of Insulin Resistance

When you have “insulin resistance,” you likely feel like you don’t have much energy to get you through your day. You might feel depressed, and have trouble getting excited about things you used to love.

Hair tends to thin out in a so-called “male pattern” from the top of your scalp, and at your temples, you may have acne, blackheads, and other skin problems.

Excess abdominal fat is one of the biggest signs of insulin resistance. If your waist measures more than 35 inches, you have what is called “central obesity” with fat packed closely around your organs.

Since insulin lets glucose into the cells for energy, cells that are resistant to it will not be able to make energy out of glucose in the blood. Therefore, you can actually have high blood sugar while having low cellular energy. This is why a common complaint among insulin resistant people is always feeling both hungry and tired.

Insulin resistance is both a cause, and an effect of being overweight or obese. And most of its symptoms relate to obesity and stress. But insulin resistance itself plays a large role in the development of some nasty diseases of the modern world such as type 2 diabetes, metabolic syndrome, even Cushing’s syndrome. These diseases lead to a host of problems that affect your heart and your thyroid.

Insulin resistance is a feature of diabetes and diabetic people have it in varying degrees. Diabetes causes impaired circulation due to a narrowing of the blood vessels in the body, including those in the skin. This means that your tissues don’t get the oxygen they need. One of the symptoms of diabetes is hair loss from the lower legs, as well as from the scalp, and thick, shiny skin.

Diabetes causes a dysregulation between blood sugar, insulin, and energy – which sometimes results in low blood sugar (hypoglycemia). Low blood sugar triggers a rise in cortisol, which is a often imbalanced in people with chronic high stress. High levels of cortisol suppress the pituitary gland, which communicates with the thyroid gland.[1] The result may be a sub-clinical form of hypothyroidism – and blood sugar regulation may be the root cause.

Insulin resistance is one of the hallmark signs of metabolic syndrome. Metabolic syndrome, also referred to as “Syndrome X,” describes a set of characteristics that puts a person at increased risk for cardiovascular and kidney disease. These include: obesity, high blood pressure, insulin resistance, central obesity and dyslipidemia. Its prevalence is nearing 30 – 50 % in developed countries. [4]

Playing a similar role to that of metabolic syndrome, insulin resistance, together with high levels of stress hormones can lead to the development of Cushing’s syndrome – of which insulin resistance is a defining trait. Women with Cushing’s are riddled with problems of hyperandrogenism including hair loss, hirsutism, osteoporosis, heart problems, and infertility. 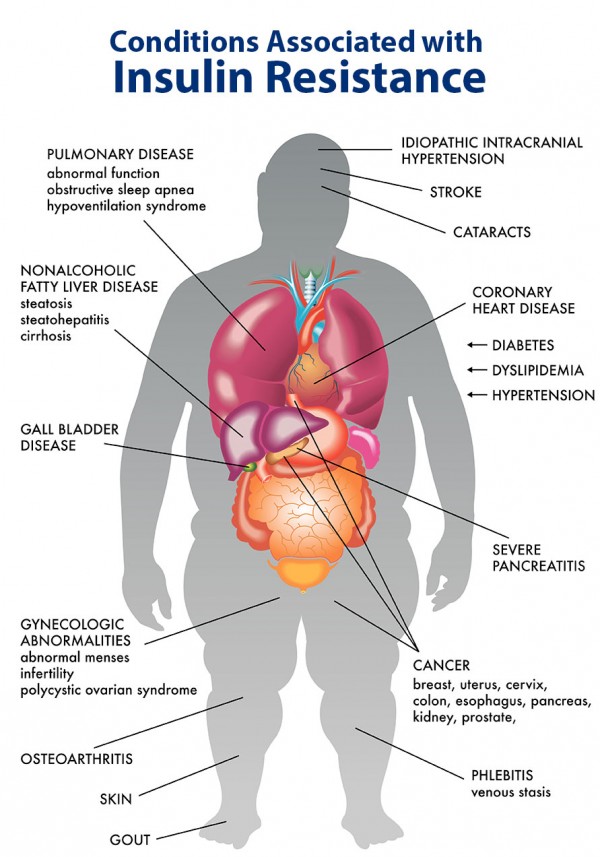 Insulin Resistance can be caused by chronic hyperglycemia, from eating excess calories over an extended period of time, and becoming obese. Having higher bodyfat generally means that there are more free fatty acids in your blood. These fats compete with sugar, which is your cells’ preferred energy source, and can effectively prevent blood sugar from taking its rightful place in your cells.

In addition to priming the body to be estrogen dominant and stressed, the imbalanced hormones and inflammation caused by carrying excess fat leave many women with depressing symptoms like hair loss and accelerated aging.

Besides producing its own active hormones, excess fat produces inflammatory compounds such as C-reactive protein (CRP), resistin, Tumor Necrosis Factor – Alpha (TNF-a), and Interleukin- 6(IL-6). All of which are inflammatory markers that go up in the instance of obesity and insulin resistance. These trigger autoimmune response in diseases like diabetes and even depression.

Insulin resistance means that the cells’ receptors for insulin become de-sensitized to it, meaning more insulin is produced to try and level out blood sugar. This means that any time you eat a meal, whether it is sugary or not, you have higher insulin spikes in the blood than would a normal person.

Excess insulin stimulates the receptors for androgens, as well as increasing androgen production from the theca cells on your ovaries. This produces the symptoms of hyperandrogenism such as thinning hair, hirsutism, acne, and sometimes a more “android” body shape (apple shape).

In addition to causing insulin resistance, carrying too much extra body fat contributes to estrogen dominance. Estrogens are unable to counterbalance androgens in the same way that progesterone can, and this contributes to the chain of hormonal imbalance. This is why working toward a healthy weight and higher metabolic rate should be one of the first steps you take.

A simple 5% reduction in weight is often enough to have a positive effect on your hormones if you are overweight. That means for a 200 pound woman, losing 10 pounds would be enough to start a positive change in your hormonal makeup. Excess fat loss is an essential step to getting your hormones on track. But remember that there is a delicate balance between cutting calories and keeping your metabolism healthy.

Be aware that chronic energy deprivation from very harsh and restrictive diets leads to a low metabolic rate. This is bad for your thyroid, hair, and health in general.

Sadly, many overweight women, myself included, have gone through cycles of yo-yo and crash dieting to try and lose the fat. If you’re already in a compromised metabolic state (which you probably are if you are losing hair), then you want to lose the weight in a moderate, and low-stress way.

What we eat or don’t eat can be a factor in the development of insulin resistance.

We must overcome the disadvantage of the modern diet. Whereas 50 years ago, we might have eaten foods from our gardens and local farms on a daily basis, we now pick up whatever we can afford from the grocery aisle with little knowledge about where it comes from – especially if it’s processed.

Ingredients that go into making the pre-packaged meals and snacks from box and bag can be sourced from many places across the country and even the world. Some ingredients are imported from countries where toxins, herbicides, and pesticides haven’t been outlawed or regulated. And the “food” producers who use these ingredients only care about their bottom line, not caring that consumers are gradually getting sick from eating what they sell.

Meats, milk, and eggs that we eat can also pose the same problem. We have to be conscious of what our “food” eats as well, and consider that large scale meat, dairy and egg producers feed their animals the cheapest feed possible.

Inflammation caused from eating foods containing who-knows-what contributes to a widespread disability to turn our blood sugar into energy that can grow our hair and make us healthier overall. That doesn’t even include foods that we know we’re allergic to, which also contribute to insulin resistance and inflammation – think certain grains, fats, gums, and food additives.

Eating too much food at one time, or failing to use the energy from the food you eat can also contribute to the problem. If you’re eating an excess of “empty” calories that digest fast, and never using that energy through movement and exercise, your cells may become resistant to all of the insulin produced.

And it may seem counterintuitive, but a diet that is high-fat, low-carb can contribute to insulin problems as well. Our cells actually prefer to use the sugars from carbohydrates rather than using fats to create their energy. Denying the body its preferred fuel can cause us to become insulin resistant.

Heightened levels of glucocorticoids (such as the stress hormone cortisol) play a role in causing insulin resistance as they reduce the response of insulin’s receptors.[5] In a state of severe stress of any kind, the body needs more energy than in a non-stressed state and will take what it needs (which is a lot) from what you already have in your tissues. If your cells were to use the all the sugar in your blood while you are in a stressed out state, you would waste away very, very quickly.

But the body intuitively knows how to preserve itself. And so, high levels of stress hormones will actually down-regulate your cells’ ability to take up insulin. When you have both elevated stress hormones and insulin resistance, you see disorders like Cushing’s Syndrome and Metabolic Syndrome that can involve hair loss, abdominal fat gain, and a breaking down of the body.

Insulin resistance can be enabled by excessive aldosterone circulating through the blood. Aldosterone is a hormone that regulates sodium balance. There is a noted increase of aldosterone in people with metabolic syndrome.

High levels of aldosterone inhibit proper insulin metabolism in the body, and harm the lining of your blood vessels, which decreases cardiovascular and kidney function. Aldosterone decreases muscular sensitivity to insulin, and increases inflammatory proteins in the fat cells. This ends up causing inflammation and glucose intolerance.

Excess aldosterone also plays a part in kidney disease by over-stimulating the receptors that regulate water and normal concentrations of salt in your body.[6] Over activation of these receptors causes insulin resistance through inflammation, oxidative stress, and decreased insulin sensitivity.

There are many different factors that play into insulin resistance. Some of them are in our direct control.

It’s worth the effort to take control of those things that we can, as these can correct the condition.

Is it possible to reverse hair loss that has occurred as a result of insulin resistance? As long as your body has the ability to heal itself (which is pretty much your whole life), then I believe hair loss is reversible. Our part in reversing hair loss requires clearing out the causes of insulin resistance such as harmful foods, stress, and excess body fat.