Hormones help shape us into who and what we are.

They effect our development and the growth of our body, and hair.

This post focuses mainly on our “reproductive” hormones from the ovaries, as different hormone systems are discussed more in posts 2 and 5. The topic of hormones is a complex one, as we have many glands that produce a number of them. The sex hormones can “meet” other hormones on different pathways. The graphic below shows more about the body’s hormones, and which glands produce them. 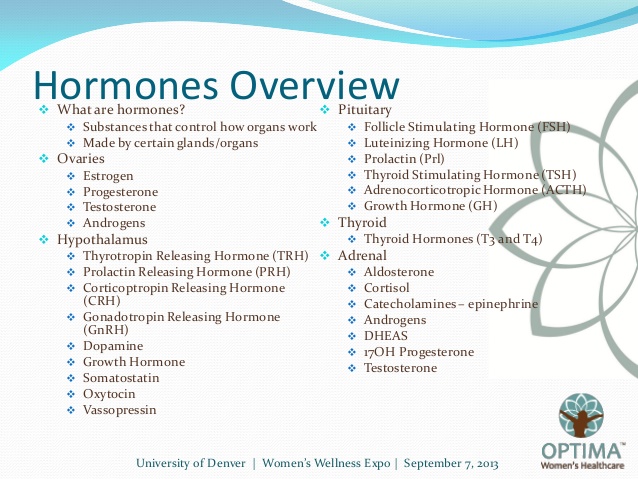 Health conditions associated with female hair loss often relate to problems with our reproductive hormones, and their interplay with androgens, which men have in much higher amounts than women. These conditions can cause “masculine” characteristics such as balding and facial hair growth. Imbalances of the reproductive hormones becoming increasingly prevalent as our hormones, lifestyles, and diets grow further out of balance.

We are learning that a special process called ovulation, which creates the hormone progesterone in pre-menopausal women, is essential for keeping our hair growing strong.

One of the most common causes of hormonal imbalance in women, especially younger women, is polycystic ovarian syndrome (PCOS). This syndrome is the result of not ovulating for an extended period of time, resulting in a progesterone deficiency, often with estrogen dominance and hyperandrogenism. Hyperandrogenism is a feature of three quarters of women with PCOS. It is also seen in women with It is the over-production of androgens from the ovaries or the adrenal glands.

In a woman of reproductive age, progesterone is made in the corpus luteum, which is the follicular sac where your monthly egg is produced. After ovulation, the egg pops out, and travels down to the uterus for fertilization or excretion in the menstrual period. At which point the corpus luteum becomes a progesterone powerhouse. If the egg isn’t released from the ovary, it becomes a cyst and fails to produce the necessary progesterone. Progesterone is a powerful female hormone that naturally opposes cortisol, estrogen, and androgens – one reason why the deficiency found in PCOS often creates masculine characteristics.

How can I tell whether or not I’m ovulating regularly?

There are different “symptoms” to ovulation that you can watch out for. They may not all happen at once to signal ovulation. If you don’t have any of these signs, you may not be ovulating regularly. These are taken from Rachel Gurevich’s article on About.com [1].

There are confounding variables that may prevent you from detecting ovulation when it’s happening. For example, stress can cause low sex drive, even if you are actually ovulating. Of these options, checking your basal body temperature is one of the most accurate predictors. Or you may also purchase an ovulation prediction test kit.

There is a wide spectrum of symptoms in PCOS, here are some of the most common:

A diagnosis of PCOS means that other disorders are already ruled out (usually through blood or other laboratory test). Disorders that present with PCOS-type symptoms include hyperprolactinemia, nonclassical adrenal hyperplasia, and thyroid disease[2]. However, you can still have polycystic ovaries in the presence of these other disorders, and they may even play a hand in the development of severe PCOS, but treatment strategies would be different.[3]

In an interview with Sean Croxton of UndergroundWellness.com, Stefani Ruper of PaleoForWomen.com, explained that there are three types of PCOS that show up in women. Each one represents a different set of causes. This is important to know, because it shows that there is more to the condition than the overweight-and-hairy stereotype.

The first type, which makes up at least 60% of cases, is the insulin resistant and overweight type. The second is the metabolic/psychological stress type. And the third type is PCOS caused by an under-active thyroid. She suggests covering all of your bases by attacking multiple problems at once to fully recover from the disorder. Having studied and recovered from the condition herself, she wrote a comprehensive book on how to solve PCOS, available on her website.

What causes PCOS and other disorders of ovulation disturbance?

A common way to manage the symptoms of PCOS is through the use of hormonal birth control pills. These not only contain estrogen, but prevent ovulation – which is the primary way we make progesterone. Birth control is a form of “chemical castration” of the ovaries. It further suppresses your body’s already compromised production of progesterone. Anovulation is one of the key characteristics of PCOS. So birth control just perpetuates the primary problem, even though it gives the illusion of a regular menstrual cycle.

Birth control pills have also been known to worsen diabetes and insulin resistance. And the synthetic progestins in certain forms of BC can actually stimulate the androgen receptors directly (leading to virilization and hair loss). So in this case, the treatment usually adds to the problem. [4]

Many foods in the modern diet are contaminated with pollution, pesticides, and antibiotics. Many of these things are, or contain, compounds called “xenoestrogens” which act like estrogens within your body and accumulate in your tissues. They overburden your digestive system and the liver, which is the organ most responsible for clearing out excess endogenous (made in your body) estrogens.

Phytoestrogens found in plants like soy, or herbs like Dong Quai and Black Cohosh, flax, and others can also contribute to estrogen dominance, even though they are often suggested as a means of fighting hair loss.

One disturbing possibility is that the types of birth control your mother used, the kinds of chemicals she was exposed to, what she ate – these things can all predispose you to having problems with your own cycles and ovulation down the line. What happened to you while in our mother’s womb may affect our own fertility, rendering you susceptible to PCOS.

If your mother was overexposed to xenoestrogens while you were in the womb, it probably has had an impact on your own ovaries, rendering them less able to make their own progesterone via normal monthly ovulation. Usually, this problem isn’t detectable until after an affected girl has reached puberty.[5]

Although your genetic makeup and in-utero experience can affect your body’s readiness to ovulate, the condition can either be improved or exacerbated by lifestyle factors.

NCAH: An Adrenal Problem of Anovulation

About 10% of patients thought to have PCOS actually have an underlying genetic enzyme defect in adrenal steroid synthesis called Non-Classical Adrenal Hyperplasia (NCAH). NCAH is a very complex disorder involving hormones from the adrenal. Women with this rare disorder have an inability to synthesize cortisol. This causes symptoms of adrenal hyperandrogenism. It is much more common among certain ethnic groups: Ashkenazi Jews, Italians, and Hispanic peoples. Untreated women can stop growing in height at an early age, and they may become infertile.

More than 90% of NCAH cases are due to a 21-Hydroxylase enzyme deficiency. Cortisol isn’t necessarily elevated in the case of NCAH, it just cannot be used properly by the body. To diagnose NCAH, doctors investigate your 17-hydroxyprogesterone response to ACTH stimulation.[6]

This disorder can be hard to recognize because symptoms can vary greatly from one person to the next. Some will have noticeable symptoms, while others never develop any. Symptoms of this disorder include early puberty, menstrual irregularities, hirsutism, PCOS-like symptoms, thinning hair on scalp (especially temporal balding), hypertension, and insulin resistance.

NCAH is identified by a blood test, taken in the morning, that looks at levels of adrenal steroids (17-hydroxyprogesterone, testosterone, and androstenedione). Diagnosis is confirmed by an ACTH stimulation test. Treatment for NCAH includes the steroids Cortef, Dexamethasone, and Prednisone. These supposedly restore fertility and reverse the acne that is common in the condition.

Since NCAH is considered to be a disorder of genetic mutation, treatment of it centers upon management of symptoms. Cosmetic treatments such as laser and electrolysis are recommended for hirsutism.

If the disorder is caught early near puberty, glucocorticoid treatment is recommended to “decrease the risk of persistent anovulation.”[7] Prednisone, dexamethasone, and prednisolone are used to treat adolescents and adults. Ironically glucocorticoids can cause abnormally high levels of cortisol and inhibit calcium absorption.

Anti-androgens such as flutamide, finasteride, and cyproterone acetate are recommended to women with NCAH who have hirsutism or female androgenetic alopecia. However, it has been noted that these drugs had little effect on androgen levels. They may also have permanent undesirable side effects.

Since women with NCAH are prone to the same conditions that occur in PCOS, like obesity and insulin resistance, it might be best to manage these with healthy weight and diet. Keeping the rest of the body in balance offers hope for this condition as well. Lifestyle factors including stress reduction, and supplying the diet with the right types of nutrients and vitamins will also help.

Excessive levels of the hormone prolactin are often found in women with progressive hair loss, which is probably why it has been dubbed the “molting hormone.” Prolactin is a hormone secreted postpartum that induces lactation. It breaks down a woman’s bones and tissues to infuse nutrients into her breast milk. Prolactin also interrupts a woman’s reproductive function, causing hypogonadism.[8]

This is usually a good thing for a new mother, as it prevents her from getting pregnant again immediately while she is breastfeeding. But hyperprolactinemia doesn’t just affect new mothers. It is a common finding in women with diffuse hair loss, absent of androgen excess.

Symptoms that look like androgen excess often occur in hyperprolactinemia, even without excess androgens or standard hypothyroidism. Such symptoms include seborrhea, acne, hirsutism, irregular periods and amenorrhea.[9]

Environmental estrogens such as bisphenol-A have been shown to increase prolactin’s gene expression and proliferation even more than your own natural estradiol. Exogenous estrogens can easily bind to estrogen receptors in the brain,[11] increasing prolactin’s expression in the body.

A normal level of prolactin in a woman who isn’t breastfeeding is about 20 ng/mL or less. Causes of hyperprolactinemia – besides excess estrogen – are progesterone deficiency, pituitary tumors, subclinical thyroid conditions, heavy metal load, drugs like cocaine, and certain estrogenic herbs like black cohosh, alfalfa, and dong quai.

Bromocriptine is a popular treatment for hyperprolactinemia, despite having hair loss as a side effect. When you bring the factors that cause prolactin excess back into balance, your levels of this hormone will return to normal. Working to reduce excess estrogen and balnce your reproductive system, increasing metabolism and thyroid health, cleansing your body of heavy metals, herbs, and drugs – will most likely result in a decrease of prolactin without a need for more medication.

[5] What Your Dr. May Not Tell You about PCOS Polycystic Ovary Syndrome (PCOS) A New Epidemic that Causes Infertility, Excess Hair, Acne and More By John R. Lee, M.D. and Virginia Hopkins http://www.virginiahopkinstestkits.com/pcos.html